Auntie Elsie came into town with us.  Had ice in Lewis.  She went to see old ladies.  We went to see Daddy and Auntie Sis etc.  Then went to show.  Saw “A Thousand and One Nights” at Gaumont.  Had supper and went home after having drinks.

Tried to book seats at Hippodrome to see Hot Ice, impossible.  Elsie gave us £1.  Had tea Gaumont, then drinks then went to Stockland for more drinks. 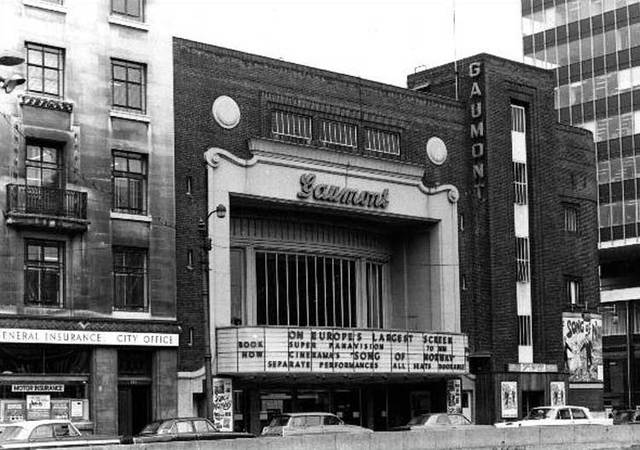 Got up early and caught 9 o’clock train.  Floods had subsided.  Got into London early.  Had drinks in Bear and Staff.  Lots of stage and screen people in there.

Went to Leicester Square Theatre.  Saw George Brent in The Spiral Staircase.  Had lunch etc.  Got train 5:30 to Guildford.  Had drinks and supper.  Went to Onslow, then to show.  Saw Humphrey Bogart in Conflict.  I was sick.

Went to show.  It’s nice having Johnny around the house.  Hand still in bandage.

Did not go to dance.  Had drink at 3 Horseshoes.  No fish and chips.

Did not go to show as I’d seen one of the films.  Johnny took photo of me in the Garden.  Left on last bus.

Johnny came round, brought Ace.  Elaine came too.  Had supper then, curse it, he had to go back to camp, as he has to go up to the Hospital early about hand.

Went to Ewhurst with Wendy to watch her dancing.  While I was out, Johnny phoned, the poor darling’s hand is broken, so he has to go to the hospital and probably won’t get down for a few days, Oh! Gosh!  I feel like crying.  Gee, I miss him terribly and love him so very much.  Went shopping.  Had headache.  Edna phoned.  Coming 2nd March.  Ace phoned.  Coming Saturday.

Johnny phoned.  Promised I’d go and see him tomorrow.  Mummy and Pamela found out about the baby.

Went to Guildford 12 o’clock.  Had cup tea, caught 1:15 bus to Bramshott Hospital.  At last found Johnny.  Film on Weekend at Waldorf.  Felt faint.  Johnny got me water.  Had super there.  Got home 8 o’clock.

Went got papers.  Went to White Heart and had drink with Johnny.  Wore his hospital blue trousers.  Darling Johnny had to leave 6-50.  Oh gosh!  It was wonderful to have him for a few hours.

Johnny has a few days leave till Sunday.  Went to show.

Cecil had to go to camp.  We got up to see him off.  Went had drinks in the evening.

Stayed in bed till late.  Boys went and had drink.  Went to White Heart in the evening.

Went to White Heart again.  Got quite merry.  Bought some chips.

Went to doctor Kettlewells.  Edna came with me.  Examined me, but could not tell much.   Have to go to the hospital Thursday.  Met Johnny and Cec in Onslow.

Went to Hospital for Internal examination.  Verdict: I’m going to have a baby!! Of course we already knew, and so does everyone else.  Johnny for one couldn’t resist telling everyone weeks ago!!

Johnny comes home every night now.Â  It would be so lonely without him, as Daddy is now in Birmingham.Â  He has a job there.

Made appointment to have hair permed.Â  Went to show.Â  Johnny came, saw George Formby in â€œI didnâ€™t do itâ€.

Johnny came.Â  We didnâ€™t go out as it was so wet.

Rained all day.Â  So didnâ€™t go out.Â  Elaine came round.Â  She and Pamela went to show.

Johnny came, all bruised and with his wrist in agony.Â  Did best we could.Â  Didnâ€™t know what to do with it all night.

Johnny came, had been to M.O.Â  Took ex rays and bound it up in plaster.

Malcolm came to Auntie Elsie for weekend.Â  Also Maurie.Â  Met Johnnyâ€™s friend Cecil Ace and wife, Sylvia at College Arms, Sparkhill.Â  I was sick, so came home at 10 oâ€™clock.Â  We could have gone dancing and stayed night with them.

Went into Guildford.Â  Got evening dress. White with red polka dots.Â  Mrs. Kosten Hendricks helped me alter it as it was too long.

Went to Cranleigh College dance with Johnny in taxi with Lt. Cmdr and Mrs. Kosten and Pam.Â  Had drinks etc.

Went to Onslow with Johnny.

Johnny arrived to help us move.Â  Went to Onslow.Â  Andy, Jack and Elaine and friend came to supper.

Moved into our new house today.Â  Got radio fixed up etc.

Went to show with Johnny.Â  Also to Onslow.Â  Pamela brought Andy, Elaine and Jacky to supper.

Johnny went back to camp.Â  Radio broke.Â  Went to show.

Wrote letters and sent off competition.

Johnny came this evening.Â  He has 4 days leave.

Johnny and I caught 9:45 bus to Guildford, then train to London.Â  Got room at Union Jack Club, Waterloo.Â  Went drinking.Â  Went to Lyons Brasserie.Â  Then to show at Odeon.Â  Saw George Raft in â€œStop Whistleâ€.

Had drinks, supper etc.Â  Went to London Pavilion.Â  Saw Bing Crosby, Bob Hope in â€œRoad to Utopiaâ€.Â  Went to Brasserie.Â  Got into Guildford at 7:30.Â  Went had tea, then to Lion Hotel for supper and drinks.Â  Met Daddy in subway train, on way to Birmingham.

In the Surrey Times newspaper:

This photo was published in a Sudbury newspaper.

John and Cynthia had to have permission from the Canadian Army before they could get married.

The invitation to the wedding.Â  I don’t know how they planned the wedding and got the invitations made, when they didn’t know until the day before if they could actually get married.

Had letter from my darling John. Also one from Daddy with L5-0-0 on Saturday. When John came. I had 2 parcels from Johnâ€™s mother and sister. Bridal set, (nightdress, slip and panties). Also 2 pairs stockings and pair of babies booties. I had to pay 18/1 for them. Gosh was I mad.

Also had letter from John which one of the fellows brought down.Â  Sent of some invitation cars. I should have come on duty at the Station Sat. but forgot all about it. Went on duty today. Phoned StrandPalace Hotel. They are full up. Girls moaned (because I) forgot going on duty.

Had letter from Uncle Arthur. Our troops have started to invade near France.

Mr. Pryke gave me a cheque for L2-2-0 for wedding present. Carm and Chuck came to supper. Donâ€™t think Iâ€™ll tell John. He hates Carmel. Pamela at Elaineâ€™s went to dance. Stayed in and did sewing.

Elaine came in evening. Gee Iâ€™m getting excited. Hope John can get leave. The weddingâ€™s just got to come off now. Iâ€™ve been dashing everywhere arranging things. Lovely invitation cards.

Went to the show. Saw Fred McMurrey and Paulette Goddard in â€œStanding Room Onlyâ€. Looked in dance, while I took dog walk. Eileen, Pam, and Elaine. Had a talk with Stan. Wrote to John. I write him nearly every day.

Mummy and I went to Guildford. Got rest of veiling and headdresses for bridesmaids etc. Had tea Abbotts Kitchen. Had cheque from Johnâ€™s mother 200 dollars. 44-17-10.

Went to show. Wrote to John. Gee Iâ€™m getting excited. To think Iâ€™ll really be Johnâ€™s wife, and heâ€™ll be my own darling husband. Heâ€™s the best man in the whole world and the handsomest too, and I wouldnâ€™t part with him, not for a million pounds I love him with all my heart and soul. Oh! Dearest come to me soon.